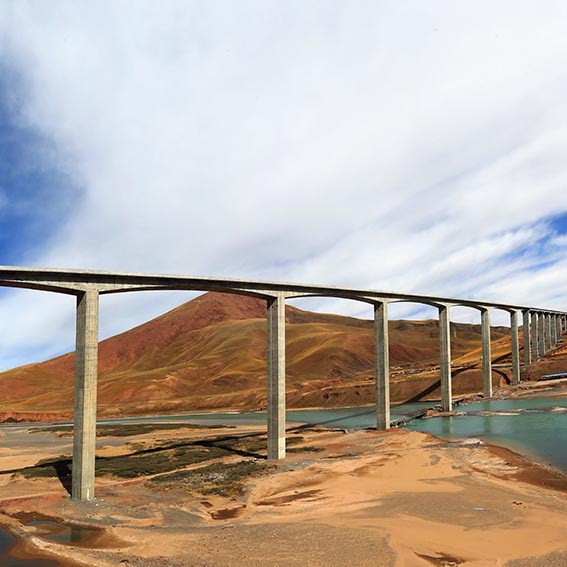 The Gonghe-Yushu Expressway (GYE) on Qinghai-Tibet Plateau is 627km long. Permafrost along the corridor occurs at elevations between 4000-5000m and is extremely unstable with average temperatures from -1.5℃to -0.5℃. The GYE is a “lifeline” built in 2010 by the Chinese government as part of the reconstruction of the Yushu Tibetan Autonomous Prefecture after the Yushu Earthquake.

Following roadway construction in permafrost areas, the engineering distress rate resulting from thaw-settlement and frost-heave can reach over 30%. Prior to the GYE, no expressway had ever been constructed in a permafrost region due to the immense thaw risk.

Design of the GYE included remarkable technical challenges. First, a breakthrough in theory had to be achieved to satisfy the need for safety and stability of the expressway. Second, the sensitive ecological environment had to be preserved to prevent damage to the Three-River Source area in China that provides water for billions in Southeast Asia.

China initiated a series of research programs, investing 150 million Yuan. The State Key Laboratory of Road Engineering Safety and Health in Cold and High-Altitude Regions established advanced theory, methodology, and technology for the expressway design and construction. This was supported by 50 years of observational data and permafrost engineering experience, and by construction of a 15km long test section. The methods and technologies developed were applied to the construction of the GYE, the first expressway at an elevation of over 4000m. The first 5 years of operation proved an overwhelming success. The main design and construction achievements are summarized here:

• Field tests found that conventional mitigation methods for roadways in permafrost would have been uneconomical when applied to the expressway. Therefore, we established concept, technical approaches and parameters for the energy balance between structures and permafrost, and designed 15 kinds of new structures to modify the energy balance and limit deformation of the embankments along the expressway. These techniques and structures have been successful, as the distress rate of the GYE at operating speeds over 80km/h has been only 2.5%, which is far lower than the roadways in other permafrost areas (30%).

• A grass transplant and recovery technique was also developed in part of an environmental conservation strategy aiming for “zero disturbance” construction. This transplant technique caused the survival rate of the bio-engineered protection to be over 95%. Consequently, the GYE was called by the Tibetan “an expressway that grew up from the grassland”.

In summary, the breakthrough techniques developed for the GYE have resulted in an expressway of the highest quality in the world with a low impact on the regional ecology. It is considered a new milestone in permafrost engineering by the International Permafrost Association and a classic example of permafrost science development.

“Winning of the IRF Global Road Achievement Award (GRAA) in the research category for the Gonghe-Yushu Expressway in China means a lot to all participants. For the State Key Laboratory of Road Engineering Safety and Health in Cold and High-Altitude Regions, it means a great development in the theories, technologies and methods for expressway engineering in permafrost areas. For the CCCC First Highway Consultants Co. Ltd, it means a new breakthrough in road construction, which will lead the development of international transportation infrastructure construction in permafrost areas and promote the harmony between human development and the nature.”