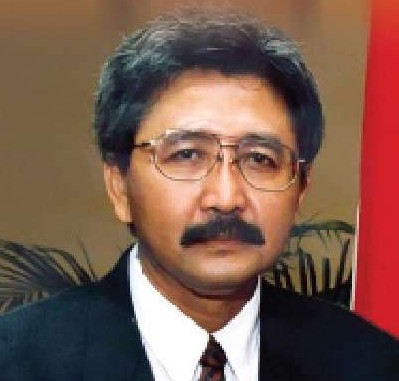 Indonesian VM Hermanto Dardak is IRF’s Professional of the Year

ALEXANDRIA, Virginia – Indonesia’s Vice-Minister of Public Works, Engineer Hermanto Dardak, has been awarded the International Road Federation’s highest and most prestigious individual distinction. Established in 1951, the Professional of the Year Award recognizes eminent public, private and education sector professionals with an outstanding track record of leadership and commitment to the road transport industry. Over the years, the award has recognized some of the world’s most influential transport leaders for their work in the field of advocacy, policy, research and educational programs in support of better, safer and more sustainable road networks globally.

“Over the course of a distinguished career, Vice-Minister Dardak has spearheaded key infrastructure programs that have readied Indonesia for the challenges of the 21st century,” noted Eng. Abdullah A. Al-Mogbel, Chairman of the International Road Federation. “The Award Nominating Committee also took note of Engineer Dardak’s efforts to foment bonds between the students of today and leaders of tomorrow, a goal which is enshrined in the founding principles of the International Road Federation.”

“The International Road Federation is an organization with abundant experience in road transportation, playing a major role in all aspects of road policy. It is an honor for me to accept this award," Mr. Dardak stated. Since assuming office in 2010, Vice-Minister Dardak has notably overseen a historic acceleration of Indonesia’s efforts to enhance its connectivity through unprecedented investments in the country’s highway program. “As a result of increases in funding in the past years, our infrastructure is now much better ranked in international benchmarks,” Mr. Dardak said.

IRF President & CEO C. Patrick Sankey praised Engineer Dardak for being "widely recognized among his peers in the profession who have elected him President of the Road Engineering Association of Asia and Australasia (REAAA)." "The IRF’s Professional of the Year Award is a further accolade to an exceptional career," Mr. Sankey added.

The IRF Professional of the Year Award will be presented during the 1st IRF Asia Regional Congress & Exhibition which is being held in Bali, Indonesia, November 17-19, 2014.

The International Road Federation, founded in 1948, is a not-for-profit, non-political organization with the mission to encourage and promote development and maintenance of better, safer and more sustainable roads and road networks. With a membership network in 90 countries across six continents, the IRF believes it can make a difference by providing best practices and expert advice to today’s multi-faceted world of transport.