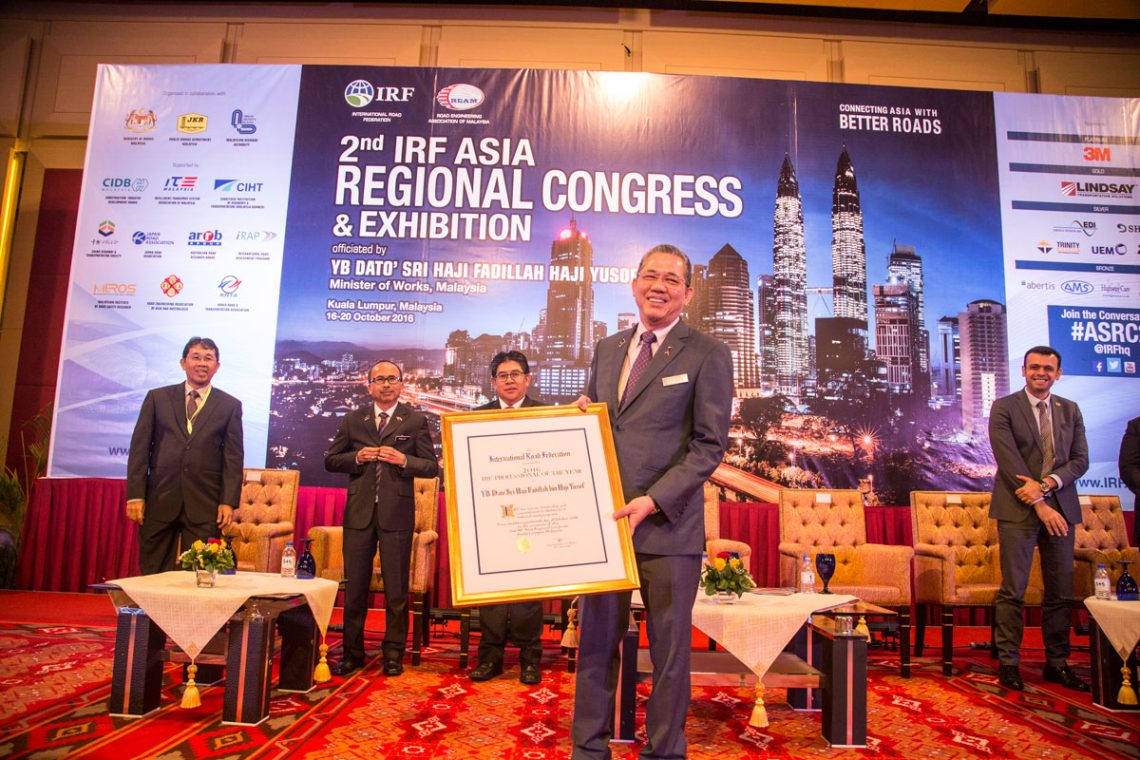 Established in 1951, IRF's Professional of the Year award recognizes eminent public, private and education sector professionals with an outstanding track record of leadership and commitment to the road transport industry. Throughout the years, the award has recognized some of the world's most influential transport leaders for their work in the field of advocacy, policy, research and educational programs in support of better, safer and more sustainable road networks globally.

Prior to his political mandate, Dato Fadillah was actively involved in non-governmental organizations and numerous charities. His foray into politics saw him elected as a Member of Parliament in 2004. In 2008, Fadillah was elevated to the post of Deputy Minister of Science, Technology and Innovation leading to his appointment in 2013 as Minister of Works.

Dato Fadillah quickly immersed himself in implementing innovative strategies to aggressively address Malaysia's road deficit as a means to promote economic development and shared prosperity. Malaysia has now embarked on its most ambitious road development program ever conceived since independence - the Trans Borneo Highway connecting the states of Sarawak and Sabah and linking Brunei Darussalam. Estimated to cost some 27 billion Malaysian Ringgit, this 1,300-mile, four-lane toll-free highway is scheduled for completion in 2025.

Accepting the award, the Minister said that "road construction is expected to continue being an important driver for the economy and a key generator of skilled jobs for Malaysians as we progress towards a high-income nation."

IRF Chairman Abdullah Al-Mogbel highlighted the achievements under Minister Fadillah's tenure, noting they would serve as an inspiration for regional leaders in their efforts to address Asia's infrastructure deficit. "The award will also further strengthen the ties between Malaysian transport stakeholders and the global community of road professionals," he said.

The award was presented during the Opening Ceremonies of the 2nd IRF Asia Regional Congress & Exhibition in Kuala Lumpur.

ABOUT THE IRF: The International Road Federation is a global not-for-profit organization, headquartered in Washington, DC since 1948 and supported by regional offices throughout the world. The IRF serves a network of public and private sector members in more than 70 countries by providing world-class knowledge resources, advocacy services, and continuing education programs which together offer a global marketplace for best practices and industry solutions.