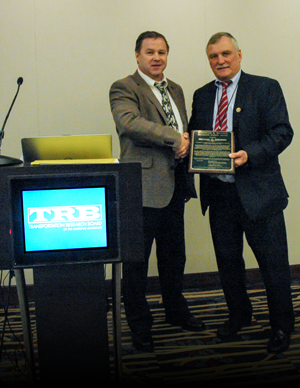 The Kenneth A. Stonex Roadside Safety Award was established in 1991 to recognize lifetime contributions to roadside safety.  It was originally named for Ken Stonex, a General Motors employee who was a pioneer for roadside safety long before the seriousness of run-off-road crashes was recognized by most transportation agencies. The Transportation Research Board’s AFB20 Committee on roadside safety now presents the award annually to a deserving individual during TRB’s Annual Meeting.

Mr. Dreznes was presented with a plaque that reads:

In recognition of a lifetime of contributions and leadership to improving roadside safety throughout the world.

For the majority of his 25 plus year career, Mike has represented two major suppliers of highway safety devices and while diligently promoting these products, his real passion has always been education.  He has taught thousands of people in more than 50 countries around the globe the value and benefits of investing in road safety-helping both advanced and developing countries improve their highway systems.

His work with the International Road Federation has broadened this reach and he is a well-known and highly respected teacher.  Mike has been a tireless promoter of effective deployment of crash cushions and guardrail end treatments.  His leadership on many different committees including the TRB AFB20 International  Research Activities subcommittee has allowed him to further his work to deploy new technologies and improve practices worldwide.

His passion for Forgiving Highways will be one of his many legacies but the real reward is the countless lives that his work has saved over his career.