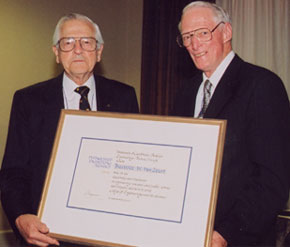 Theodore W. Van Zelst, an honorary lifetime member of IRF, has officially announced his retirement from the IREF board, after more than five decades of service.

Van Zelst served as chairman of IREF in 1978 and has remained active throughout his life promoting educational opportunities, especially for young engineers. Through various positions on both the IRF and IREF Boards, he worked his IRF colleagues to expand the Fellowship Program, increase the amount of scholarships awarded, and earnestly sought after private sector donations to the IREF endowment fund.

IRF expresses its utmost gratitude for Mr. Van Zelstâ€™s years of service. His influence and legacy will continue on in the IRF Fellowship program and the thousands of Fellows who are a part of this special program.