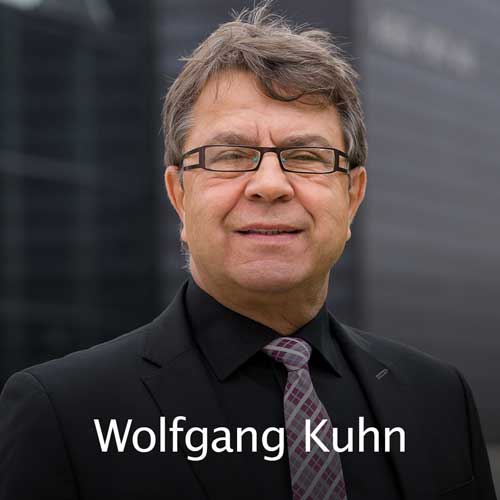 IRF: Why in your view are multi-functional corridors an important pre-requisite for the introduction of autonomous electromobility?

WK: About 55% of the world’s population will be living in large cities by 2020. In order to redesign mega-cities and their clogged transport routes in the long term and turn them into smart cities where people enjoy living and have to cope with little traffic, it is essential to divert transit traffic to large-scale ring roads or underground transport routes. It would be possible to transfer long-distance traffic to public transport services in the city via so-called interfaces.

Transport links for smart cities could be offered in the future through having multifunctional infrastructure corridors, which not only provide separate lanes for electrically powered long-distance trains and buses as well as trucks and private vehicles, but also offer energy generation using wind power and solar power units and handle the transfer, storage and supply of electric power.

It would be possible to enable private vehicles travelling on the roads to recharge their batteries at charging points or on separate charging lanes while travelling at lower speeds. This procedure could take place by means of overhead wires for long-distance trucks and buses.

In addition to traffic lanes for private transport, which would be used by vehicles with different degrees of automation (levels 1 – 3), it would be possible to construct distinct and separate traffic lanes; vehicles could then could switch to them, if necessary, and be controlled by an operator in automatic mode. During these automatic operations, drivers could devote their attention to a variety of different tasks – and recharging would be possible at the same time, if required. These automatic operations could be a first step towards ensuring the practical introduction of highly automated driving procedures (levels 4 – 6).

IRF: How did your pilot scheme validate your initial hypothesis?

WK: The energy balance (a comparison between the energy output and the energy needs) has been calculated for a section of highway that is 10 kilometers long in order to provide an example of what might be feasible; this took place as part of a pilot project. Virtual trips on a driving simulator were then compared with real journeys using electric vehicles.

The figures calculated for the energy requirements with the three methods that were used differed from each other by about 6% and demonstrated the high degree of their long-term theoretical and practical validity.

The energy yield, if the energy is generated by large-scale wind turbines along one side of the free space next to the highway (with the turbines about 300 meters apart), is about four times greater than if the energy is generated using solar panels fields along both sides of the highway (each of them being 40 meters wide). If this real scenario were used in practice, it would cover the constant energy requirements if the proportion of electric vehicles on the section of highway was about 12%.

In favorable conditions, the energy yield could cover the energy requirements if the proportion of electric vehicles reached 70%; this would involve introducing a “solar ceiling” above the highway or a “solar covering layer” at various places.

This initial basic study was able to prove that multifunctional infrastructure corridors are, in principle, capable of providing ecological, local energy generation, transfer, storage and supplies. Depending on the energy generation scenario and the proportional percentage of electric vehicles on the road, the energy balance is either positive or negative – that is to say, any excess energy that is generated can be fed into the medium-voltage grid or any shortfall in energy has to be supplied via the same network. An increase in the level of efficiency in the energy generation units would naturally have a significant effect on the energy balance.

IRF: As a researcher, what is the value of presenting your work at a Conference featuring a wide range of actors from the public, private and academic sector?

WK: A study has been performed for the first time on the local, ecological generation, transfer, storage and supply of electrical energy along a multifunctional infrastructure corridor at the Department of Transportation and Energy Engineering at the University of Applied Sciences in Zwickau, Germany. The practical implementation options for the new kinds of multifunctional infrastructure corridors will improve too by gradually continuing to develop the technology for ecological energy generation and generally increasing the efficiency level.

As the new trends in mobility involving new kinds of mobility is a global task in the transport sector, particularly in the light of the greater emphasis being placed on ecological issues in our society, and this requires international cooperation in research, the presentation and discussion of the pilot study must take place at international conferences.

As the planned multifunctional infrastructure corridors require complex and interdisciplinary academic and technical analysis, are normally international and cross-border routes and therefore require significant research and development costs, international cooperation is necessary with different players involved in the working groups.

It has been possible to plan, implement and operate a test route for this kind of infrastructure corridor for a period of time in order to gain initial practical experience; this took place as part of an international research and development project.