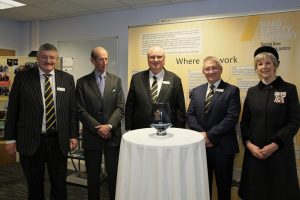 RSSi was honoured to receive the Queen’s Award for Enterprise in the International Trade category, which was presented by His Royal Highness The Duke of Kent at a special ceremony at the company’s office.

RSSi provides a unique range of specialist services to the police and highway authorities, and has worked hard to export British enforcement and road safety expertise overseas.

Formed in 2008, RSSi has worked in countries in North America, South America, Asia, Europe and the Middle East.

In the UK, Road Safety Support provides assistance to the majority of police forces, highway authorities and safer roads partnerships in England, Wales and Northern Ireland. The company’s UK activities are supported by the work of RSSi.

The Queen’s Awards, which are regarded as the most prestigious of their kind in the country, are awarded each year to businesses for outstanding achievement in four categories - International Trade, Innovation, Sustainable Development and for Promoting Opportunity.

Trevor Hall, Director of RSSi, said: “We are delighted that the hard work, dedication and commitment of our staff has been recognised. Each individual who works for us has one focus; that is to reduce the number of people being needlessly killed on the roads."

He added: “To each of us, this is more than just a job; keeping people safe on the roads is something we truly care about. By working with and supporting police forces, government and third sector organisations both nationally and internationally, ultimately we are supporting people and communities.

“It was a real honour to be presented with the award by His Royal Highness The Duke of Kent and to share the work of RSSi with so many other important guests.”